This week alone I’ve had to remove malware from at least seven Macs – all of which could’ve been prevented had people followed one simple rule: if a website you visit instructs you to update your Adobe Flash Player – don’t do it.

While I strongly advocate updating software whenever possible for the optimal user experience, these alerts to update Flash are what can best be called, using the parlance of the day, FAKE NEWS. More often than not, like seriously 99.9999% of the time, these alerts merely attempt to trick you into installing malware on your Mac.

If the only way to access the site is by allowing the update, just close your browser and move on – that’s not a site you should be accessing as its only reason for existing is to fool you into allowing the fake update. Do not allow yourself to be fooled!

Here’s the thing: Adobe Flash updates itself, either as an internal component of Google Chrome (which doesn’t use the standalone Flash Player plugin) or via the System Preferences setting for the plugin as seen below: 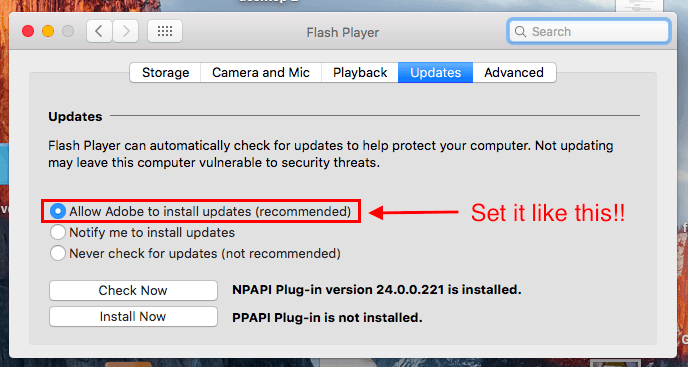 That one little setting can save people so much grief, time and money. If you’re on a Mac, regardless of the web browser you use, go into your System Preferences RIGHT NOW (from the Apple menu), and click on the Adobe Flash icon in the bottom row, and make sure it’s set to install the updates. DO NOT have it alert you to updates that you’re never going to bother to install. Let Flash do all the work, and going forward no matter what alert you see, you can safely ignore it.

The other alternative is to not have Flash installed at all. It’s a security risk regardless of updates, it drains your battery, and it’s becoming increasingly irrelevant as you surf the web. I don’t have it installed on my Mac, and I can’t even think of the last time it was an issue. On the very rare chance I need Flash for a site I visit, I view the site in Chrome instead of Safari and rely on the built-in version of Flash in the Chrome browser.

Note: if for any reason you do actually need to install Flash, here’s a safe link to do it from. Get Adobe Flash.