There’s lots of buzz these days about Pay, as Apple’s new payment processing functionality has revitalized the long dormant NFC payment world. While many people are eager to begin using Pay, there’s often a certain degree of unease when using a new technology for the first time – especially when it’s as radically different as Pay.

Fortunately, being true to form, Apple has created a payment process that couldn’t be easier or more intuitive for customers to use. Once you’ve set up all your desired credit and debit cards, you’re ready to go shopping. First thing you’ll want to do is find a merchant that accepts Pay. Apple has dozens of national launch partners offering the service, and there are countless other smaller merchants equipped with the necessary NFC readers to process the transactions. A sampling of merchants include Bloomingdales, McDonald’s, Nike, Walgreens and Subway just to name a very few.

What you want to look for at non-partner merchants is a NFC terminal – where you should be able to use Pay – with a few notable exceptions. Despite having the technology in place to process Pay transactions major retailers like CVS and Rite-Aid have elected to block Pay transactions, essentially because those transactions are so secure that merchants can’t collect demographic data from sales. Whether more retailers opt to take that course remains to be seen, but one likes to think that as Pay’s use continues its staggering growth, more merchants will come on board and support the service rather than opt out. Anyway, you want to be looking for the NFC terminals, of which there are numerous different styles, but ultimately they all do the same thing. 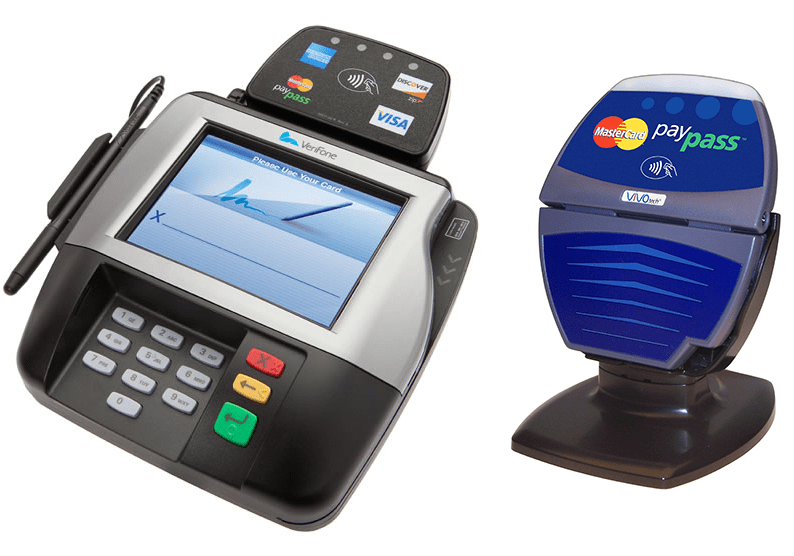 So those are NFC payment terminals – some of which you’ve likely seen out in the world, but never thought much of until now. While there are dozens of different readers out there, the key thing that you’re looking for is that wireless payment logo (the sideways WiFi strength logo and the little hand). Chances are if you see a terminal with that symbol, and you’re not at an MCX aligned store, you’ll be ready to pay with Pay.

With your shopping or order completed, and your iPhone in hand, it’s time to go pay for your purchase. Approach the register, iPhone in hand, and hold it in front of the payment terminal when it’s time to pay for your purchase. You don’t need to have the Passbook app open, or even have your iPhone unlocked – when the iPhone senses the NFC terminal, it will automatically open up the Passbook app to your preferred payment card and prompt you to place your finger on the TouchID sensor. Hold your finger to the TouchID sensor and wait a second for it to read your fingertip, and like magic the purchase will be verified and your transaction is complete.

A long description for a transaction that takes all of three seconds to complete.