UPDATE: Cloud Commander is no longer available in the Mac App Store or elsewhere – fortunately there’s ExpanDrive which is in fact a better implementation this type of app functionality.

If you’re juggling a bunch of cloud storage services, give ExpanDrive a try.

Cloud Commander where have you been all my life? Here’s the application that I’ve been longing for, to manage the numerous cloud storage services on my Mac. No longer do I need to continuously run the Google Drive, Box, SugarSync, SkyDrive and Dropbox apps on my Mac to access easily access the files I have stored on each cloud service. No longer do I need to have all the files stored on each cloud service mirrored on my all-too-full internal hard drive. If an application has ever been a godsend, this just might be it. 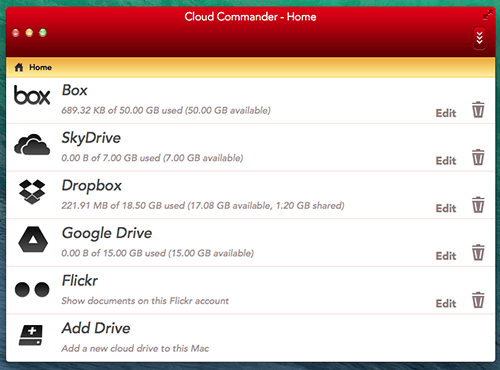 As if all that wasn’t enough, I can also save the logins for multiple accounts with each cloud service – a feat that was a nightmare to mange before Cloud Commander entered my life. As the figure below illustrates, I can have two Dropbox accounts and two Google Drive accounts – presumably two accounts isn’t even the max, that’s just all I have to test with. This is an epic shift from the way I used to work: needing to log in and out of each cloud account, wait for them to sync, and then moving my files piecemeal as needed. A weekly hassle, that Cloud Commander has banished into the past. Thanks! 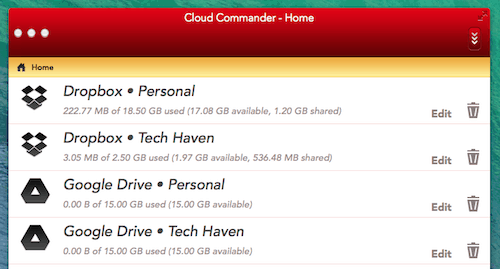 Cloud Commander works as straightforward as can be. A quick double-click on the cloud service of your choice, and a window opens with all the files on that given service. With the obligatory QuickView, progress bars, icon view and list view, Cloud Commander has the standard file management tools found in the Finder so you’ll be instantly familiar with how to use the app with virtually no learning curve whatsoever. 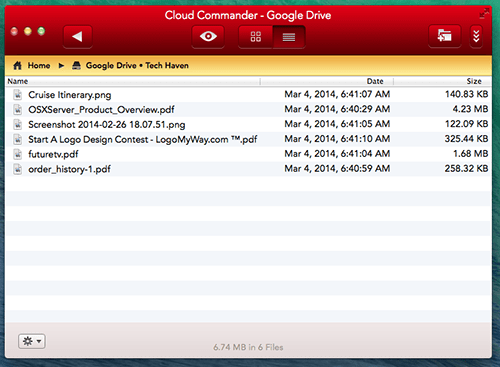 With a cloud service window open (above) you can drag a file anywhere in the Finder to move it there, removing it from the cloud in the process, or you can Option+Drag it to copy it to the new location. Now here’s one of the coolest things: by opening a second Cloud Commander window, you can drag files directly from one cloud account to another in a fraction of the time it would take to accomplish using any other method. Dropbox to G-Drive, Box to SkyDrive, Dropbox to Dropbox, you name it, Cloud Commander handles the copying and transfers with ease.

Note that Cloud Commander oddly instructs you to Alt+Drag to copy a file in the current release. We reached out to the developer and suggested changing the dialog box to the standard Option+Drag terminology. Functionally it’s the same key on the keyboard, but most Mac users know it as the Option key.

The app costs $4.99 and is available now in the Mac App Store. If you’re a heavy or casual user with multiple cloud accounts to manage, it’ll be the best five bucks you’ve spent on an app lately.