Ulysses is a hot new Mac writing app that’s getting a lot of buzz these days, so I decided to check it out. I downloaded the demo version, which is functionally the same as the full Mac App Store version with a ten-hour use limit and without iCloud syncing.

If you do a significant amount of writing, be it for work or personal reasons, no doubt you’ve tried a few different writing platforms, and most likely settled on Microsoft Word or something similar. If that’s the case, depending on how you like to write, it might be time for a change.

Word was first released for the Mac in 1985 – THIRTY YEARS AGO – and while it’s certainly the most comprehensive writing app in town, it isn’t necessarily the right tool for your specific writing job. Much like a host of new email applications are shifting the decades-old way we interact with email, Ulysses alters the way we interact with text and work on both large and small writing projects.

Much of Ulysses’ promotion revolves around the app’s distraction-free writing interface. To be fair, that’s a significant feature when it comes to focusing on getting real writing done, instead of tinkering with all the bells and whistles that characterize the legacy word processing apps. But now Word has a focus mode (Menu: View/Focus), and I’m sure other apps do as well, negating the uniqueness of Ulysses’ distraction-free interface. 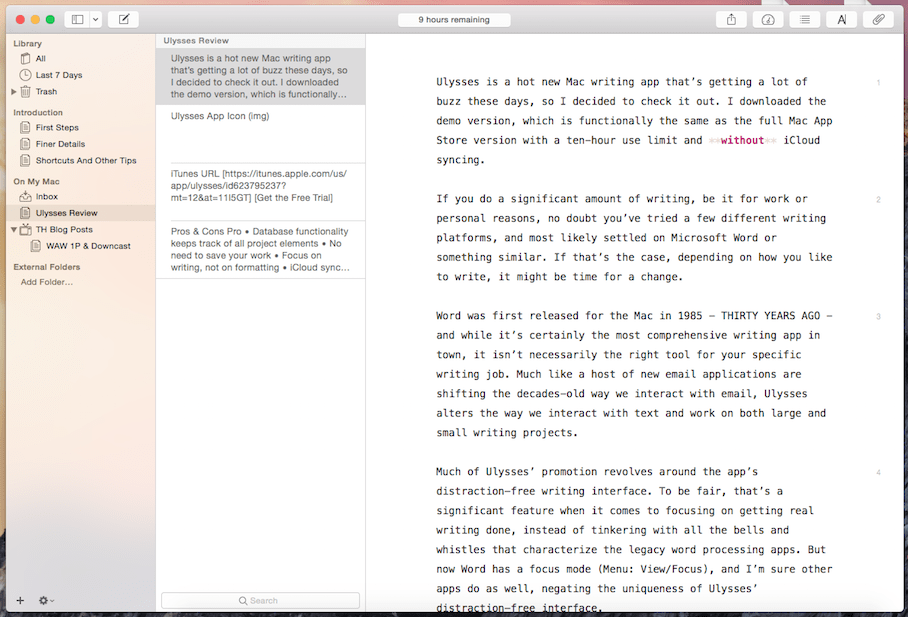 Instead, what I found to be the strongest selling point of Ulysses is the way it handles component parts of a larger writing project. For example, after creating an individual writing project, or Group in the parlance of Ulysses, I can create individual sheets within the Group that contain different elements of the writing project. Thus, as was the case when writing this review using Ulysses, I created one sheet that contains the Mac App Store URL to purchase the app, another sheet that contains a graphic file of the app icon to include in this blog post, and a third sheet that contains the main text of this review. As other items become relevant to the project, but aren’t ready to be include in the main text of the review, I can simply create a new Sheet to write down other elements to later incorporate into the main review.

Ulysses keeps track of everything with a live database, which makes “saving” a thing of the past – great news for those of you who can never quite remember to save your work often enough, and unfortunately lose it on occasion. In this sense Ulysses operates like an iOS app, because it manages all your files behind the scenes so you don’t even need to think about it. Of course, writing isn’t much good if it’s trapped inside a proprietary database, and exporting your finished work is another area where Ulysses shines. With the ability to easily export to a formatted PDF, eBook, RTF, text or HTML file, you’ve got all your bases covered for whatever your finished publishing medium is.

As I wrote at the outset of this review, the version I tried was the demo version without the iCloud syncing functionality. I have little doubt that the iCloud synching will work as smoothly as the rest of the app and greatly add to the overall user experience for those who work with multiple Macs or split writing time between a Mac an iPad. Note that while there is a companion iPad app, it’s not universal and therefore will not run on an iPhone. While that may be a negative for some, I’d imagine it’s a small group out there creating extensive written content on an iPhone.

Upshot: I like the organization features, I like the database model for saving/storing content – although it’s a challenge to break away from my decades-old writing methodology, and I even like the distraction-free writing mode, which although Word has had for years, I’ve never considered using. All in all, I’m a big fan of Ulysses, and I suspect after working with it for the remaining eight hours of my demo period, I’ll spring for the $44.99 to buy the app – which is the best endorsement I can give.